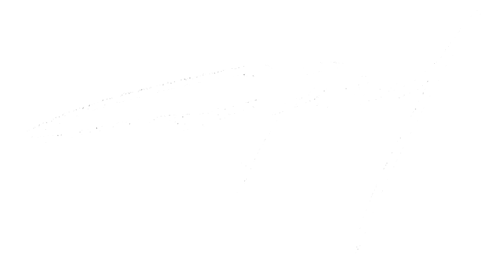 New projects need strong roots, they need to grow on solid foundations; the innovations of the present can only develop harmoniously by assuming the values of the past. Starting from these ideas, Iulian Copăcel proposes, through his plastic compositions, a unique representation of the principles of leadership (specific to the organizational culture of Amazon) in close relation with a series of defining aspects for the cultural identity of Iași. This association becomes all the more significant as Iași is a complex space, full of history, in which culture, spiritual life and economic development intertwine.

The visual message of the works takes shape by reference to the geographical coordinates of the historical and cultural capital of Moldova, the components being structured according to the connotations of the seven hills on which rise important monuments or religious buildings (7 hills): Breazu, Bucium, Cetățuia, Copou, Galata, Repeatea and Șorogari. These symbols refer to the centers of medieval culture, with a strategic role in defending and transmitting from generation to generation Romanian values and traditions, in difficult circumstances, with limited resources. Finally, extrapolating the idea in the direction of organizational culture, we can talk about assuming identity, about broad / forward thinking and pursuing long-term values (to the detriment of immediate results, easy to obtain). In addition, the success of these actions depends directly on the efficiency of resource management, the constraints leading to the discovery of new constructive solutions.

The leitmotif of Iulian Copăcel’s compositions is the traditional dress, a symbol that functions as a “cultural imprint” of a people. On the one hand, beyond the cultural dimension of identity, this element illustrates – in the artist’s vision – the attention paid by the folk craftsman to clothing details, the care with which the various motifs are embroidered. In terms of organization, this action can be correlated, in addition to the aesthetic dimension, with the need to operate significantly at all levels, to take into account all the details and values.

On the other hand, the traditional dress is represented in a close relationship with the Moldovan choir, this type of dance signifying the social cohesion / attention paid to the one next to you, the rules, the alert rhythm or even the circularity of existence. From this perspective, and within an organization, the role of leaders is to impose a certain rhythm on the team, to gain the trust of others, to act dynamically according to pre-established rules. It is interesting to mention that, in the works of Iulian Copăcel, the members of the couple appear without individualized faces, because the dancers develop a general significance, embodying the cultural values of an entire people.

The universe of these values is completed by the playback of instruments with an agricultural / practical function or with an artistic function. In this sense, by sketching objects such as the jug, the press (with grapes) or the wheel, sequences of a distant past are reconstructed in front of the viewer, in which destinies were built through hard work and dedication, to leave behind a cultural heritage. valuable. For example, the jug – which includes the members of the couple – suggests pottery from the Cucuteni culture, unique in Europe, and the press refers to the craft of wine, a tradition over two thousand years old, specific to the Cotnari vineyard. True values, therefore, involve a long process of crystallization, are skillfully built over time. The wheel (with spokes or serrated) highlights the idea of the technological process, of the mechanism that engages many interconnected moving elements. Ultimately, the meanings of the three symbols can also be projected at the level of an organization, given that the delivery of high-performance results can only be achieved through a collective effort sustained with passion and perseverance, by reporting to high standards. Achieving high goals is only possible through collaboration, through a complex set of coordinated actions, in which the contribution of each team member becomes essential. In fact, this symbol of high standards, of the direction to follow is captured by Iulian Copăcel through the ascending arrows (with a continuous or interrupted line).

At the same time, the motifs placed by the artist in the aesthetic plan – the musical instruments – nuance another dimension of the plastic discourse, through surprising connotations. Through objects such as the horn or the violin, the inclinations of the being towards creativity, towards innovation, towards harmony and communication, both social and artistic, are brought to the fore. For example, the horn is not only a traditional musical instrument, but has been used in the past for signaling and communication. And from this angle some similarities with worship can be identified.

The technique used to make the murals will be based on acrylic paints applied with various specific tools on the surface of the existing white wall. With the help of this technique the artist will try to reproduce as much as possible the fresh aspect of a watercolor on paper. 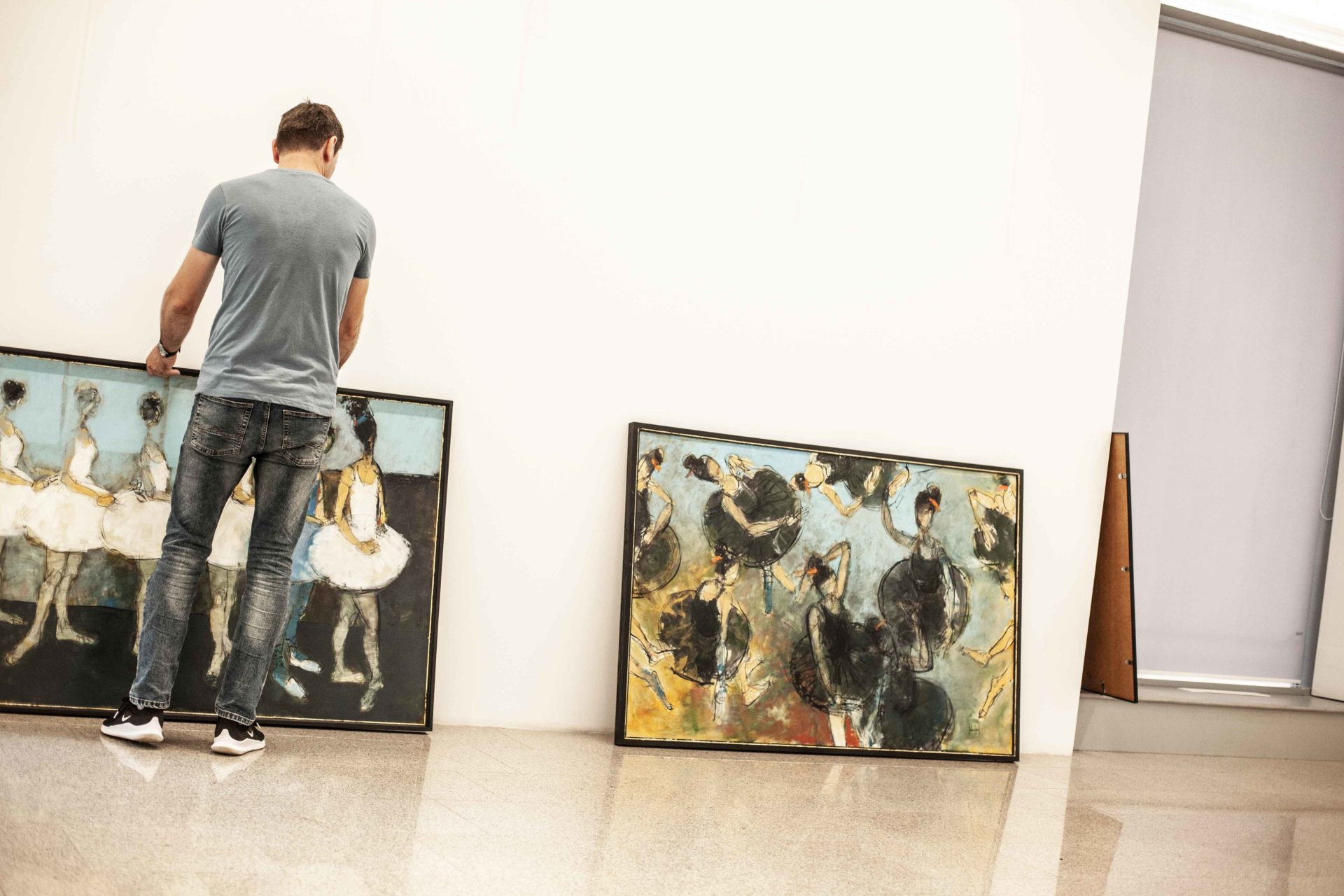 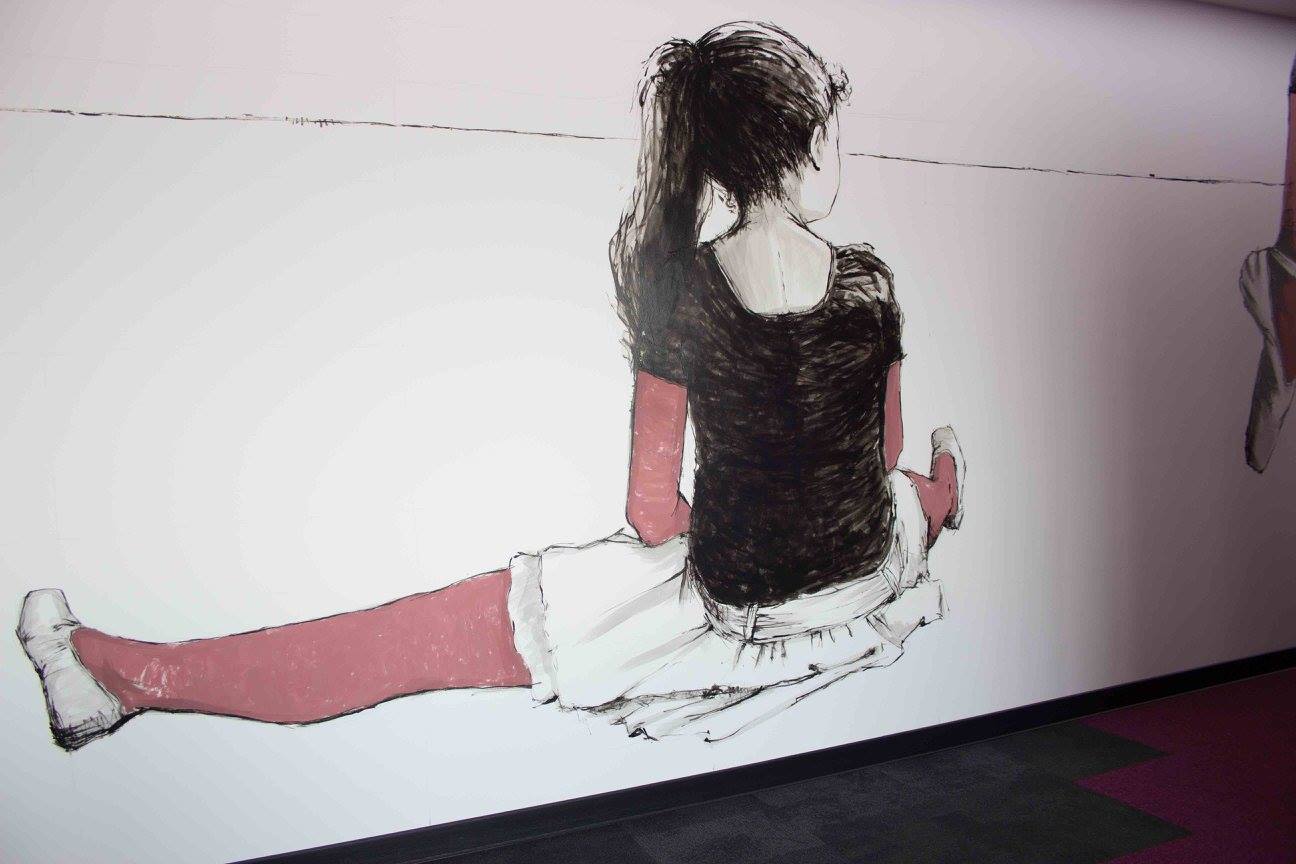 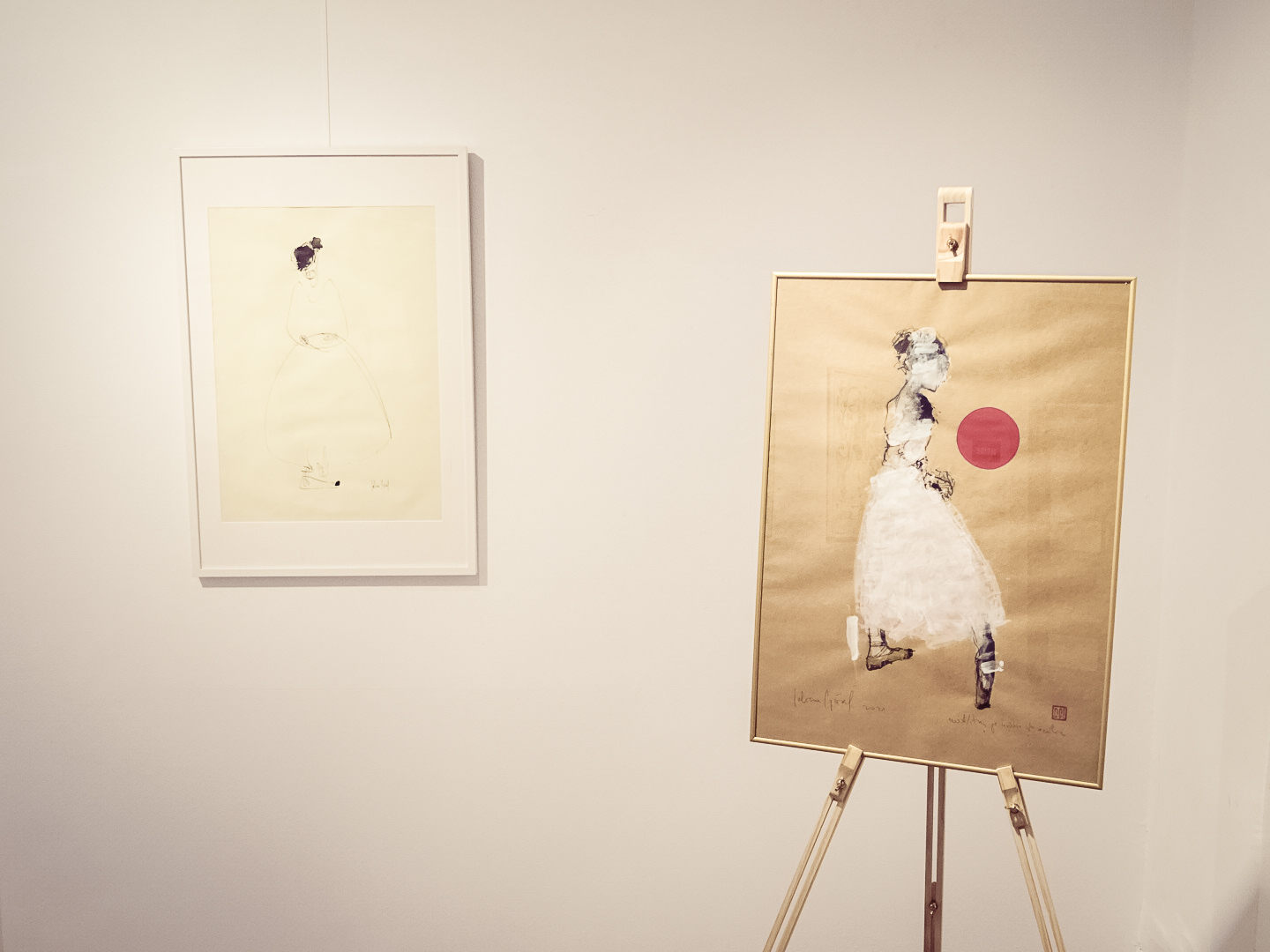